The Move to Boyd Street 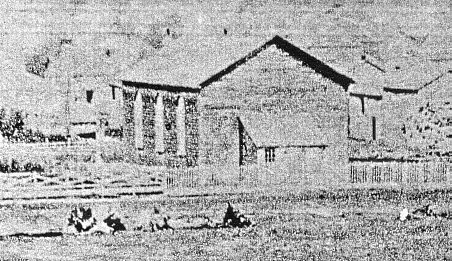 Rev. Duncan Morrison and the Move

During the ministry of Rev. Duncan Morrison, the old frame building became too small for the congregation and plans began for a new one. In 1869, they purchased the site on Murdock Street (corner of 4th Avenue and 9th Street East). In 1873, the main section was completed, opened and dedicated. Rev. Duncan Morrison visited his native Scotland and secured funds for the church bell. [The church bell is now located on the front lawn at Georgian Shores United Church.]

As the congregation increased, they outgrew the space. In 1886, the building was enlarged. The congregation worshipped in the Town Hall for several months during construction. The May 13, 1886, Advertiser described the enlarged building as “the most attractive and capicious Christian temple in Owen Sound.”

The sanctuary was described as:
“ninety feet long, sixty-feet wide, with capacious amphitheatre galleries on both sides and end, capable of seating about one thousand people. The semicircular seats in the body of church are a decided improvement in the seating plans of any other church in town, and the plan of having the choir nearly on a level with the Minister’s platform; we think also a great improvement. . . .

All the wood and other work seems to be of first class style, especially that on the Minister’s platform, pulpit or desk and the flower stands and the other fixtures about it. We believe the work was all done by Mr. Andrew Horn, our well known adept, in first class cabinet and other fine wood work.” 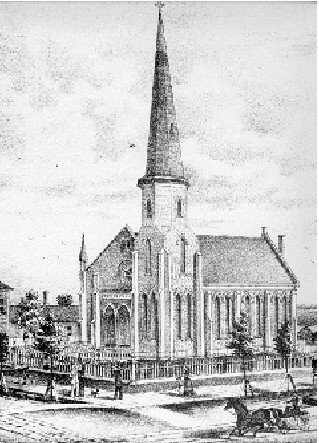 Sunday school classes commenced in 1857, but it wasn’t until May 17, 1908, an impressive Sunday School area was built. The Sunday School’s architectural style was the Akron Plan with a large open space, surrounded by classrooms on two levels. In the latter years, children attended Sunday School on the upper floor. Offices, the nursery, parlour, kitchenette and heritage room were located on the main floor. 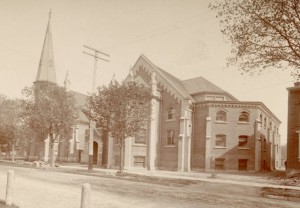 Memorial to the Soldiers